From its inauguration in October 1933, when Co. Kildare V.E.C. organised classes in the local courthouse, St. Conleth’s Community College has had a very firm commitment to change and development.   A 500 pupil extension has just been completed, this is in addition to the original building which was opened in 1979 and extends the second level capacity of the school to 750.   The school currently has 796 students on its enrolment 208 of whom are in the area of Further Education

The Day Vocational Certificate examination was offered from its inception in 1947.   The Intermediate Certificate programme was initiated in 1966 but because of the accommodation problem the Leaving Certificate was not offered until 1978 when the new school was imminent.   Since then Post Leaving Certificate courses, Leaving Certificate Applied, Leaving Certificate Vocational Programme, Transition Year and the Junior Certificate Schools Program have been added to the schedule of courses on offer in the school.
Bearing in mind the role currently being played in society by the culture of Information Technology and the role it will undoubtedly play in the future, the school is now well stocked with up to date computer facilities.   These facilities are being constantly updated to maintain a pace with the community.
We have a reduced sized football pitch due to the development of our extension. We also have an athletic track on campus which is shared with a local athletic club. A gymnasium was constructed and opened in 2013 which includes the latest sporting and physical education facilities.  It has already been used for many sporting events most notably in basketball.
We are always mindful that the school has a role to play in the broader local community and our school is used widely by a range of local organisations.   We are one of the largest centres of Adult Education in Kildare under KWETB.
In the recent academic years there have been a number of significant developments to the school:
St. Conleth's Community College is a DEIS school. DEIS is a Department of Education social inclusion strategy Delivering Equality of Opportunity in Schools , which aims to address the educational needs of children and young people from disadvantaged communities.
The interventions include the following: Our current targets under the DEIS programme are listed below: 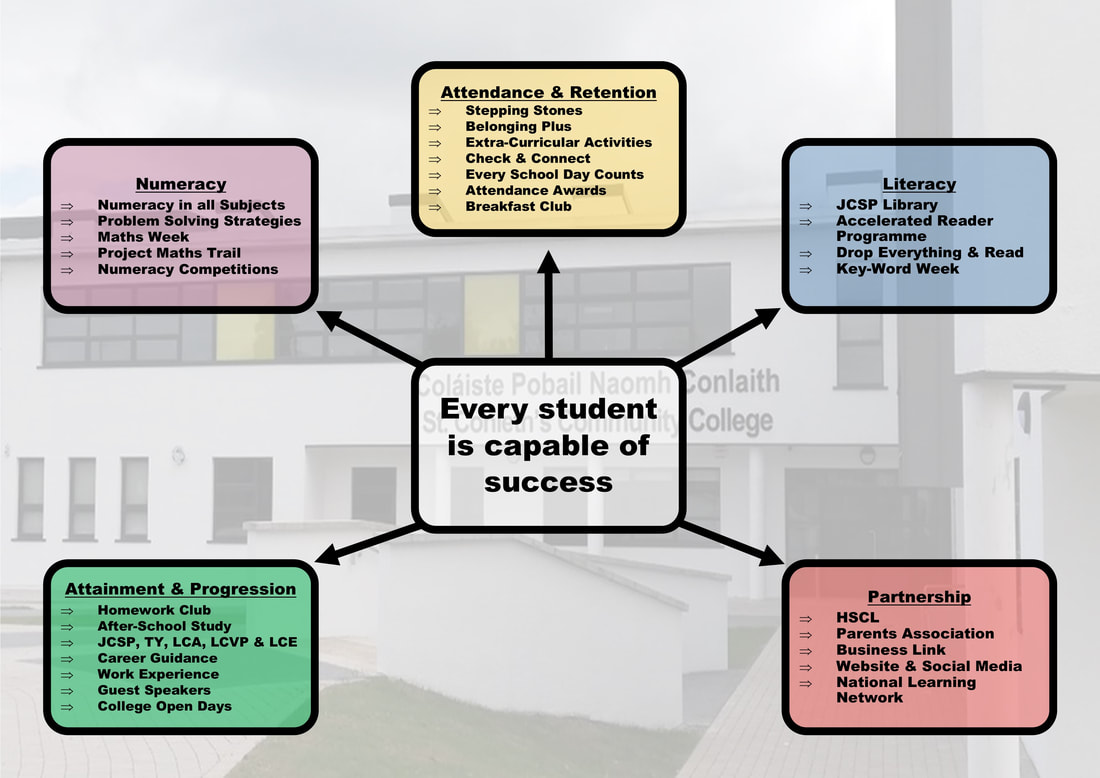