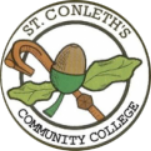 What will I learn in Religious Education?

Some of the things you will learn include:

• About at least one of the major world religions in detail

• How different communities of faith organise themselves: their leaders, celebrations, forms of worship and guidelines about their members’ behaviour

• How religious beliefs shape some ideas and laws.

Is learning Religious Education anything like what I did in primary school?

Different primary schools offer different kinds of religious education: you may have participated in an Ethics Programme; your religious education may have been separate from school; or you may not have taken part in a religion class yet. You will still be able to study Junior Certificate RE because you will use a lot of the things you have learned already, such as communicating your ideas,questioning,working in groups and finding out information using technology.

"The Story of Judaism"

I'll tell you a story of how Judaism began,
It all started in the Promised land of Canaan.
4,000 years ago in a city called Ur,
The belief in one God started to occur.
Prayers were sent by word of mouth,
Starting at north and travelling to south.
Soon every Jew became aware,
That their Holy God, Yahweh, was everywhere.
Synagogues were built to learn and pray,
With hope and belief forever Judaism will stay" - By Caithlyn Loughrey (1G)
Mission Statement
St. Conleth’s Community College provides a positive learning environment which encourages and enables our students to achieve their academic potential while fostering their personal development.